about the greenville inn

not much has changed…

Some say the Greenville Inn history dates back to the late 1800’s.  However, the furthest we can trace the bar’s history back to was to what is now a home on Cedar Street before it was moved to the 2nd floor where the Greenville is now.  The address was 16362 Arch Street.  In 1999, there were dramatic changes to the exterior of the property that surrounds the building.  The building was re-addressed as 7150 Pine Street.  Arch Street was removed and the remaining part of the street is now part of our parking lot.

The furthest we’re able to track ownership back to was a man named, Julius Gajdos who owned and operated the bar from early 1960’s to the mid 1970’s.  In 1975, Gajdos sold the bar to brothers Bob & Dave Benson.  While Bob was majority owner, he relocated to California a few years after the purchase.  Dave ran the club until his death in 2004.

During his tenure, the bar did quite well until 1980’s.  Stricter laws, increased taxes and rising costs made it increasingly difficult to be profitable.  In the early 1990’s, Benson decided to put a small stage in the back corner of the bar.  He then hired a young man by the name of Jimi Kinkaid to bartend and recruit local bands to play the small club on the weekends.  With the addition of live music and Kinkaid, the Greenville Inn was once again booming and quickly became a popular destination spot for local bands and music lovers all over northeast Ohio.

With the passing of Dave in 2004, Bob put the bar up for sale.  It was purchased by Phil & Amanda Seigal in 2005.  While ownership had changed, they retained Jimi in his roles.  The Seigal’s made some much needed improvements to the bar including newer, larger restrooms, a smoke-eating system to alleviate the heavy cloud of cigarette smoke always present prior to the indoor smoking laws in 2008, and the addition of a fully enclosed outdoor patio where patrons could smoke and still legally enjoy their drinks.

In October 2021, The Greenville Inn was  sold by the Seigal’s.  After 27 years, Jimi – the bartender and booking agent, along with his wife and fellow bartender Andrea Kahn became the current owners of the Greenville Inn.  They are excited to make some needed updates and changes to the club, but vow to maintain the legacy and atmosphere that makes the “Ville” one coolest dive bars around! 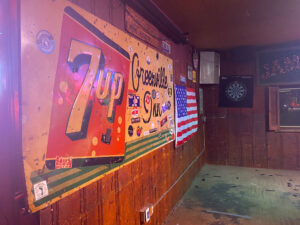 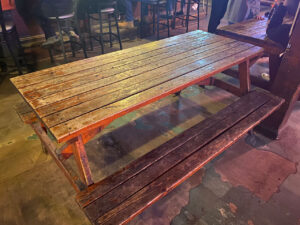 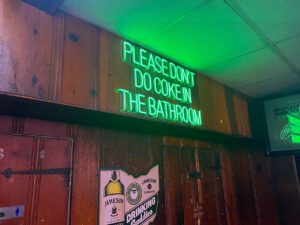